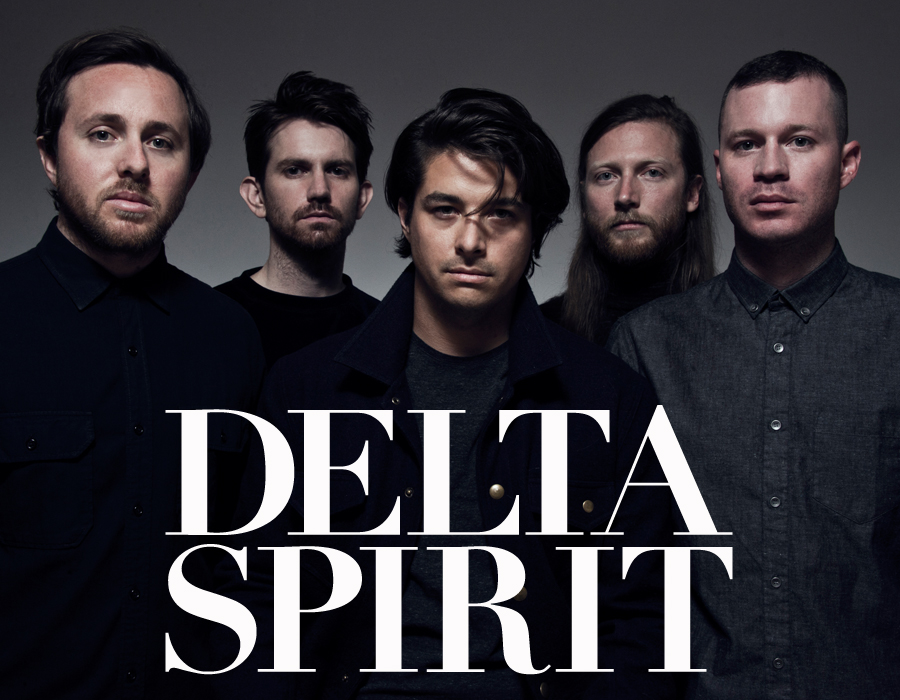 The fourth album from San Diego-bred five- piece Delta Spirit, Into the Wide was born in a flood-ruined, cave-like, rat-colonized room in the band’s new hometown of Brooklyn. After spending more than a year writing together in the windowless studio they rebuilt after Hurricane Sandy wreaked its havoc, the group resurfaced with a batch of demos and headed to Georgia to team up with Ben Allen (a producer/engineer known for his work with artists like Animal Collective and Deerhunter). Recorded near an old shipping yard in Atlanta, Into the Wide intimately captures the claustrophobia of Delta Spirit’s creative space, turning that tension into a moody meditation on the restlessness of city life, growing older, and longing for escape. With its lyrics largely inspired by the murder ballads of Bob Dylan and Johnny Cash, Into the Wide proves more darkly charged than anything the band’s ever offered up before but—thanks to their command of both indelible melody and sprawling, atmospheric arrangements—ultimately emerges as Delta Spirit’s most gloriously heavy album so far.

For Delta Spirit (vocalist/guitarist Matt Vasquez, multi-instrumentalist/vocalist Kelly Winrich, guitarist Will McLaren, bassist Jon Jameson, and drummer Brandon Young), the raw, nervy energy running throughout Into the Wide stems partly from the band’s return to the more free-and-easy approach they embraced in making their debut album, 2008’s Ode to Sunshine. “On that first record we had no idea what kind of music we were going to make—we just went up to a cabin and pressed record and went for it without any fear,” says Young, who sparked the founding of Delta Spirit back in 2005, when he spotted Vasquez busking in the streets of downtown San Diego. So while Into the Wide continues to push forward in exploring new sonic territory (as on 2010’s History From Below and the band’s self-titled 2012 release), Delta Spirit have also restored a sense of kinetic flow to their communal songwriting process. “When we were writing there were these songs that we really labored over and tried to polish,” says McLaren. “But in the end, those songs didn’t belong to us. The tracks that make up the album were the ones that happened quickly and naturally and just instantly felt good to us.”

Despite that lack of polish, each of the songs on Into the Wide is driven by lavishly textured arrangements and a deeply heady emotionalism. Hazy and hymnlike, “Push It” opens the album by personifying the U.S.A. as a beat-down, reluctantly indestructible woman and musing on the rival forces of decay and idealism that define American life today. From there Into the Wide gives way to the triple-threat of the triumphant, guitar-fueled “From Now On,” the frenetic and punch-drunk “Live On” (an ode to surviving bully brutality, inspired by Vasquez’s Texas childhood), and the groove-powered yet anthemic “Take Shelter” (Winrich’s celebration of being hopelessly lost but still finding your way to the light). The album then leads into “Hold My End Up,” a haunting and howling epic that builds to blistering intensity in its lament of “school shootings and movie-theater shootings and that darkness that lives in us and the loneliness of the inner monologue,” as Vasquez explains.

Into the Wide sustains that forward-charging momentum as songs journey from Middle America to Georgia to Reseda to the California wilderness, the possibly mythical locale serenaded on its dreamy, gauzy-guitar-laced title track. On the deceptively soaring “Patriarch,” Vasquez twists his own past experience with evangelical group The International House of Prayer into a story of a cult-stolen girl who believes that God has called on her to kill herself. (“I’ve always been fascinated by that whole element of American music,” says Vasquez of the song’s murder-ballad-esque approach to storytelling, “and I love the idea of trying to carry it into the 21st century and writing songs that have a simple theme but take you on a journey in just three minutes.”) The album’s second half also features such standouts as “Language of the Dead,” a stomping piece of psych-pop that name-checks both Bob Dylan and Robert E. Lee in its send-up of hero worship (“Throw your idols into the sea/Dreamers, get your own dream”). And on “The Wreck,” Into the Wide comes to a close with a gorgeously stark piano ballad that’s equal parts lovely and aching in Vasquez’s tribute to his wife’s enduring faith (“They all warned you ‘bout me/Don’t give your heart to a wreck”).

As Delta Spirit’s most sonically expansive album yet, Into the Wide somewhat paradoxically owes its broadened sound to the band’s holing up in what McLaren calls their “dreary, EPA Superfund of a practice space” for months on end. “We’re lucky to have it, but being stuck in this room with no windows and dreaming about getting back out into the world and into nature and seeing the country again seemed to pull something deeper out of us,” notes Jameson. Adds Winrich: “That sense of feeling trapped in our studio and in the city definitely gave the album more of a weight than our previous records, and played a big part in this being our moodiest record yet.” But when it came time to record, relocating to Maze Studios in Atlanta helped breathe new life and brighter energy into the songs selected for Into the Wide. “One of the most of the important things was getting back to all of us being in a room together for every single song and recording everything live,” Young points out. “I think Ben even lied and said the AC was broken so we’d all be in there sweating like we do when we’re onstage.”

Keeping an eye toward the live experience is always essential to Delta Spirit, who name playing 293 dates in 2009 as one of their top points of pride. “We just want the songs to be as epic and meaningful as possible when we play them in front of people, which is the be-all and end-all for us as a band,” says Vasquez. In moving toward creating music that’s transcendent for their live audience, Delta Spirit strive to stay focused on the singular benefits of communal songwriting. “There’s something sort of magic about getting five incredibly distinct personalities to get behind something they can each claim as their own, instead of having the music be the product of one person’s specific vision,” Jameson says. What’s more, Vasquez adds, that commitment to collaboration ends up being infinitely rewarding once the band takes the stage. “To be able to play something and think ‘I created this’ is one thing,” he says. “But to have five different people standing together onstage and all of us feeling the vibration of that at once, that’s kind of amazing.”