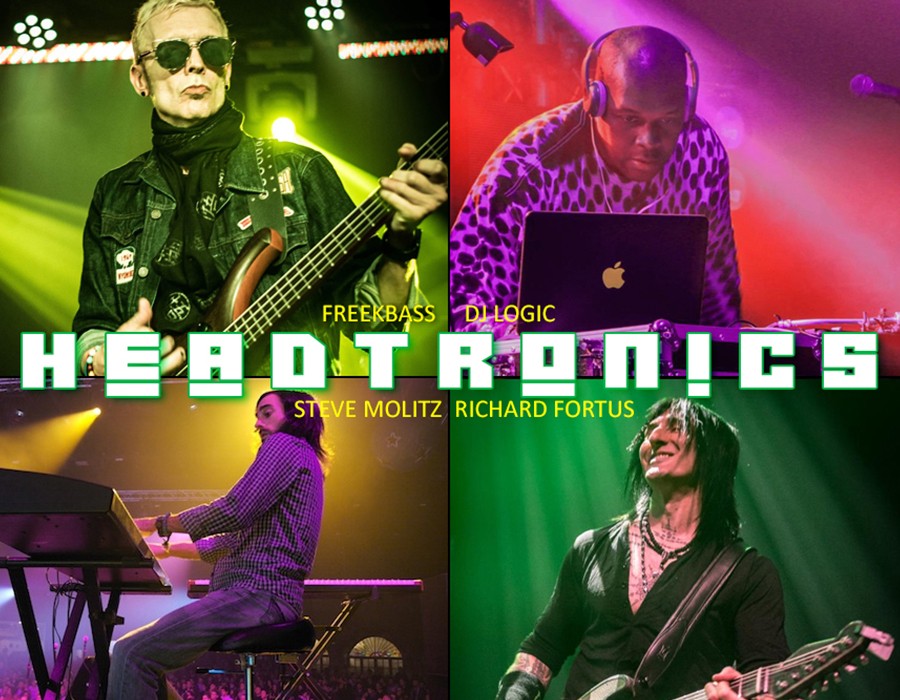 This line-up is SICK! Headtronics is the live-music group, blending four distinct genres: electronica, jam, funk and rock. Featuring the musicianship of some of the best in the touring circuit, the twist is that every Headtronics performance is completely improvisational. Founding members DJ Logic, Steve Molitz and Freekbass, started the group after an impromptu jam at The Church of Universal Love & Music, and have since featured guest artists such a Bernie Worrell, DJ Spooky, Adam Deitch (Lettuce) – and now welcome guitarist, Richard Fortus from Guns N’ Roses/Pale Divine, for 2019 tour dates.
With a Headtronics show, songs are built and created, live on stage, by a super-group of musicianship. No two shows are ever the same. Simply put, to experience a Headtronics show, is to be at a Headtronics show.
Richard Fortus / Rock-guitar (Guns N Roses, Psychedelic Furs, Pale Divine)
DJ Logic / Beat-maker (DJ Logic & Friends)
Freekbass / Funk-bass (Freekbass & The Bump Assembly)
Steve Molitz / Synthesizer and keys (Particle, Phil Lesh & Friends)
Richard joined legendary hard rock band Guns N’ Roses, in 2001 and began touring with the band and recording for the bands “Chinese Democracy” record. The album was released to great anticipation in 2008 and Richard has continued to tour with the band, taking him to every corner of the globe. Richard’s long resume includes his group, The Eyes/Pale Divine, as well as Psychedelic Furs, Love Spit Love, Thin Lizzy and The Dead Daisies, as well as numerous recording projects. He adds “Headtronics” to his resume, with the Feb. 2019 tour run.
The theorem of turntablist as musician has been long proven in the capable hands of DJ LOGIC, whom with jazz as his foundation has become a wax innovator by crossing genres and mixing his sound across the map. As one of the world’s most accomplished turntablist’s, DJ LOGIC is widely credited for introducing jazz into the hip – hop realms and is considered by most as a highly respected session musician and an innovative bandleader.
Freekbass is a bass player/vocalist, with influences deeply embedded in funk. Cultivated under the guidance of the legendary Bootsy Collins in his early career, Freekbass is known for his energetic live show and ignited low-end, a staple on the festival and touring circuit. His most recent releases are co-written and produced by Grammy Award winner, Itaal Shur (Smooth/Santana). He has shared the stage with a host of artists from every genre: Bernie Worrell, Umphrey’s McGee, Turkuaz, Dumpstaphunk, George Porter Jr., Buckethead, and Mike Gordon.
Composer and keyboardist, Steve Molitz, has toured with his Los Angeles based electro-rock band, Particle, playing all the major US festivals from Bonnaroo to Lollapalooza. Molitz has also played as a member of Grateful Dead bassist Phil Lesh’s touring band and Grateful Dead percussionist and Grammy award winning world musician Mickey Hart under the name Hydra. Molitz has also recorded and performed live with a wide range of top musicians including performances with The Allman Brothers Band, Robby Krieger (The Doors), Rich Robinson (Black Crowes), G Love, and members of Phish and Dave Matthews Band.
This danceteria playground of sound, groove, and organic melody is an immersive experience. The eclectic blend from this genre-mixer, offers something for everyone. Fortus, DJ Logic, Freekbass and Molitz are four of the industries’ masters in their perspective fields, and this is a show the music fan will inhale.