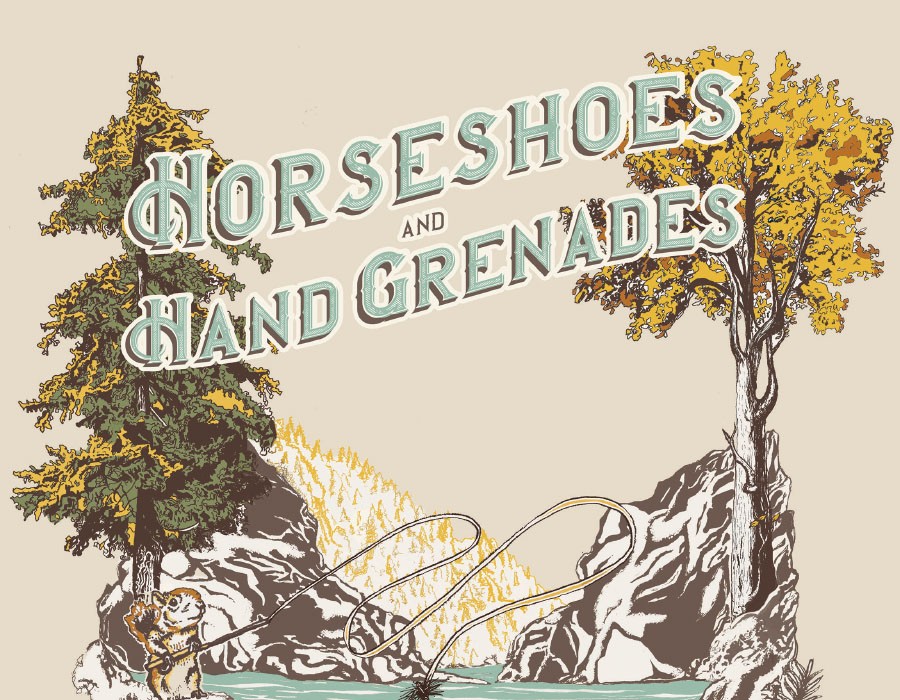 After seven years, three albums, innumerable sold out shows, and countless beers, bluegrass mavericks Horseshoes & Hand Grenades appropriately consider themselves a “family” on a wild, wonderful, and often whacky roller coaster. The bond between the quintet—David C. Lynch [harmonica, accordion, spoons, vocals], Collin Mettelka [fiddle, mandolin, vocals], Russell Pedersen [banjo, fiddle, vocals], Adam Greuel [guitar, dobro, vocals], and Samual Odin [bass]—fuels their creativity and chemistry on stage and in the studio. “Sometimes, it feels like we’re modern day cowboys on some kind of strange journey,” Adam affirms with a laugh. “We’re five friends who set out to do something we enjoy doing, meet interesting people, see old friends, and make some new buddies along the way. Because of that, everything happens organically.” That’s been the case since these five musicians first met in Stevens Point, WI at college, joined forces, and hit the road post-graduation in 2013. They have ignited stages alongside everyone from Greensky Bluegrass, Yonder Mountain String Band, The Infamous Stringdusters, and Trampled By Turtles to Railroad Earth, Merle Haggard, and Marty Stuart in addition to appearances at festivals such as Delfest, High Sierra Music Festival, Blue Ox Music Festival, Northwest String Summit, John Hartford Memorial Festival, and many more. Their three albums—Another Round [2012], This Old Town [2013], and Middle Western [2015]—have spawned fan favorite hits, including “Get Down To It,” “Stuck On Your Mind,” and “Whiskey.” In many ways, everything set the stage for the 2018 offering, The Ode. They retreated to Cannon Falls, MN in order to live and record at Pachyderm Studios — where Nirvana recorded In Utero — for just a week. Joined by Trampled By Turtles frontman Dave Simonett in the producer’s chair, they tracked the eleven numbers that would comprise The Ode over the course of a marathon session. Ultimately, the Horseshoes & Hand Grenades family grows stronger by the day. The Ode is proof.