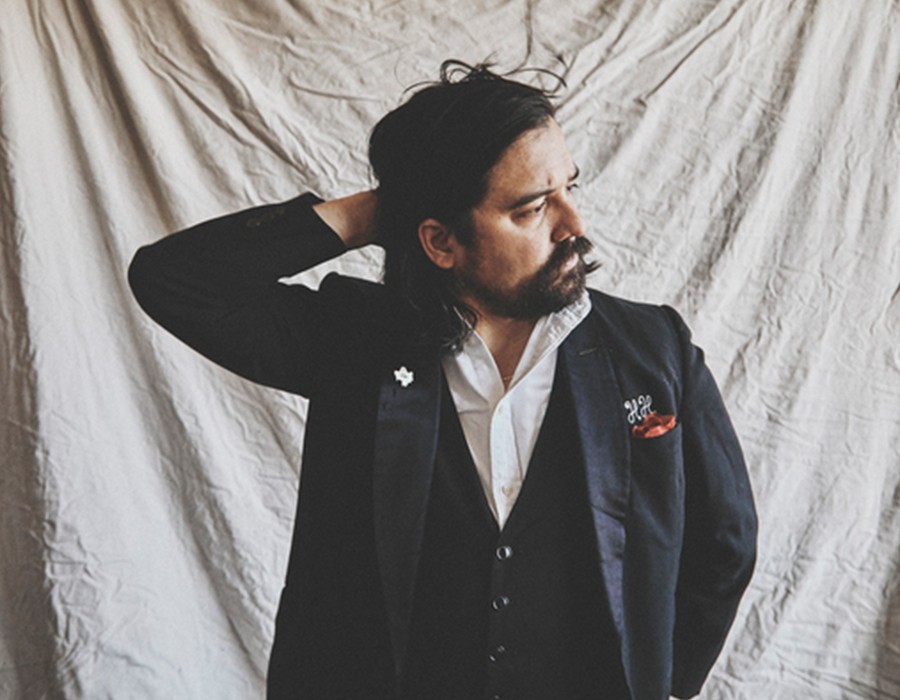 Honus Honus (aka Ryan Kattner) has devoted his career to exploring the uncertainty between life’s extremes: beauty and ugliness, order and chaos. The songs on Dream Hunting in the Valley of the In-Between, Man Man’s first album in over six years and his Sub Pop debut, are as intimate, soulful, and timeless as they are audaciously inventive and daring.

At the end of 2015, Man Man went on an unexpected and unforeseen hiatus, and thus began a period of creative reinvention for Honus. He worked in music supervision and on scores. He acted in the indie film Woe, So It Goes, a short musical film with Mary Elizabeth Winstead, and starred in the award-winning tour documentary Use Your Delusion. He also developed an animated series, wrote film scripts, a graphic novel, a neo-noir TV pilot, and briefly penned a music column for The Talkhouse all while continuing to work on new music, such as an unreleased kids’ record, another Mister Heavenly album, a self-released Honus Honus record, and a conceptual art/noise project Mega Naturals. He was sleeping 2.5 hours per day.

In the midst of this Man Man sabbatical, Honus began piecing together what would become Dream Hunting in the Valley of the In-Between. He recruited longtime-creative collaborator Ghahremani to help him produce. Written in a friend’s LA “guesthouse” (more shack than chic) that had “an old upright piano, a thrift store lamp, and nothing else,” it was an arduous, three-and-a-half-year process, “I had chord progression notes that looked like chicken scratch and lyrics on pieces of paper stuck all over the walls. It looked like I was about to break the big case, catch the killer,” he says, laughing. “One of the best things about this time, in these ‘lost in the wilderness/surreal exile from my own band’ years, was that I finally found players who believed in me, trusted my vision, respected my songwriting. It was rejuvenating.”

Dream Hunting in the Valley of the In-Between opens with “Dreamers,” an ethereal instrumental that soon takes a dark turn into the 20 seconds of cacophony that introduces “Cloud Nein.” An exercise in orchestral-pop storytelling tinted by wry cynicism, it features lyrics such as, “All your dreams crash and burn, and fall to the ground. When they’re made of sweet nothings ’cause nothing sticks around.” Says Honus: “I was writing a song about someone else, but also myself, in a sense. You have to keep changing, evolving in order to survive, appreciate what you have while you have it because there are no guarantees it’ll stick around forever. AKA, life.”

He would find inspiration everywhere. “If Only,” featuring feather-light vocals from Steady Holiday’s Dre Babinski, came to him in a dream. “I first heard ‘If Only’ sung in an R&B Jackie Wilson kind of way,” he says of the haunting piano lullaby. The glitched-out fever dream “Oyster Point” opens with a recording of 8-year-old Honus singing to his newborn brother and named after the town where the frontman and his bandmates met someone who tried to sell them a broken bass clarinet. An ex, bitten by a goat and worried she’d contracted salmonella (true story!), inspired the off-kilter jazz narrative “Goat.” (Spoiler alert: It doesn’t end well!) In the opening seconds of “Goat” you can actually hear the first time Honus presented the song to his band —an iPhone recording of his drummer playfully teasing, in classic 80s movie tone, “Don’t fuck this up. This is a big gig,” before launching seamlessly into the studio version. “I was taking songs out under the guise of my solo band,” he explains, “so we could test the waters, see what worked live, what didn’t, and then I’d adjust accordingly. When it came time to finally record, we did everything at Cy’s studio but after a year or so of tracking, I didn’t like how ‘in the box’ and stiff everything felt so we booked out a short tour with the sole intention of rolling back and recutting everything together live in a larger studio space. In two frantic tracking days. It was crucial to me that this album feels like a band playing together in a room, communicating with each other, breathing, organic, slithery, alive.”