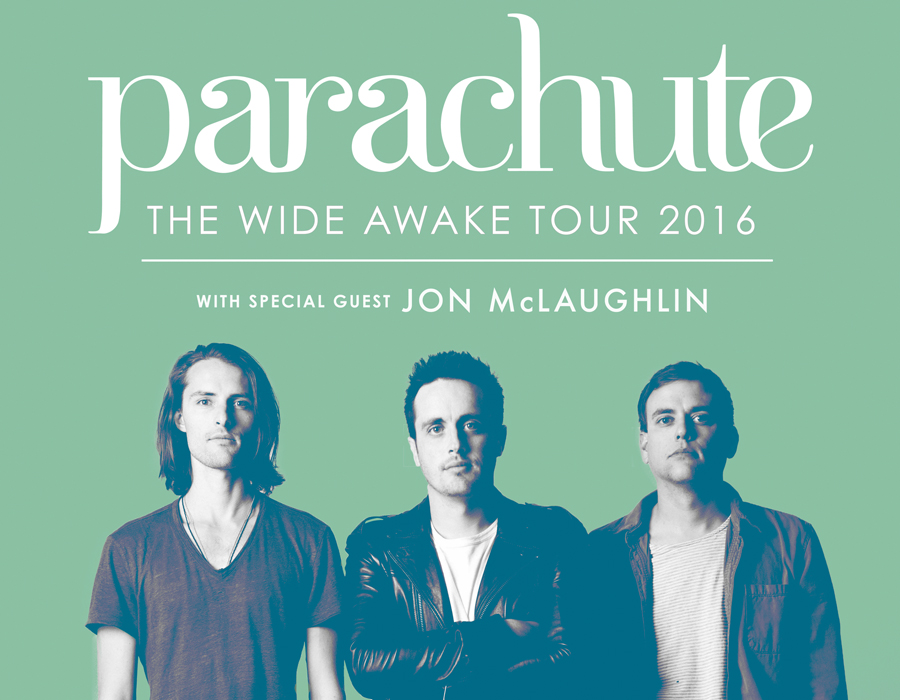 Back when they were in high school, Parachute’s Will Anderson (vocals, guitar), Johnny Stubblefield (drums), and Christopher “Kit” French (saxophone, keyboards) spent nearly every afternoon in Anderson’s basement, dreaming up songs showing a deep affinity for classic pop, heart-felt rock, and tuneful blue-eyed soul. Now, after a decade of touring internationally and turning out smash singles like “She is Love” (#1 at iTunes) and “Can’t Help” (the first single from the band’s 2013 album Overnight, which debuted at #15 on the Billboard Top 200 chart), Parachute are set to deliver a new album that reclaims the spirit that first sparked their love of music. “Making this record felt just like that one hour after school when we were kids,” says Anderson of Wide Awake, the band’s fourth full-length album. “It was like we were all 15 again and just starting to discover that excitement of creating songs together.”

With a sound that’s impassioned but sunny, fresh but timelessly organic, Wide Awake centers on songs both gracefully arranged and brimming with the boundless energy of Parachute’s live show. Newly pared down from a five-piece to a trio, the Charlottesville, Virginia-bred band forged that sound in part by shaking off all creative inhibitions. “We felt like we had no limitations to chase this sound that the three of us have wanted to build for so long,” says Anderson. “It was as if we were woken up from some sort of slumber, revitalized and rejuvenated with this new awareness of who we are as a band.” Reuniting with John Fields (the producer behind 2011’s The Way It Was and their 2009 debut Losing Sleep), Parachute were also guided by the purest of instincts in the studio. “We knew a song was working when we were all dancing and having a blast with it,” says Anderson. “And if something didn’t feel good, we just let it go.”

Though that commitment to intuition is beyond palpable on Wide Awake, the album was also born from two and a half years of dedicated writing and exploration. “I don’t know if I’ve ever written more for an album, or worked so much on any specific song.” says Anderson, who came up with nearly 100 songs during that time. “It was just very important to me that we got each song exactly to where it needed to be.”

With every track on Wide Awake, Parachute matches their sublime melodies with a refined sense of songcraft. Showing a complex sensitivity shaped in part by lifelong love of artists like Paul Simon and Billy Joel, Anderson also infuses the album with both carefree warmth and emotional depth. The album’s epic opener “Without You,” for instance, captures what Anderson calls “the feeling of meeting someone and knowing that it’s going to happen,” and harnesses that lovestruck feeling with the help of gorgeous gospel harmonies and soulful horns. The gently devastating “Jennie” wraps its cascading rhythms and wistful vocals around a story of broken opportunity and love lost. “Sometimes you catch a glimpse of they way things could be but end up taking a detour,” Anderson says, “only to realize you’ve lost your chance and can’t ever get it back.”

Shifting from joy to heartache and back again Wide Awake, offers everything from the stomping, fired-up swagger of “Crave” to the sorrowful piano ballad “What Breaks My Heart” to the hushed acoustic reverie of “When You Move.” And in certain moments Parachute brilliantly embodies both bright and dark, such as on the swinging and summery anthem “Lonely with Me” (as in: “Baby if you’re gonna be lonely/Be lonely with me”) and on the moody but pop-infused “Love Me Anyway,” an ode to “knowing you’re inevitably going to mess up, but having somebody who’s willing to forgive you and move on,” according to Anderson.

In bringing Wide Awake to life, Parachute made a point of “dialing back our thought process and just doing whatever we could to best serve the songs,” as Anderson explains. To fulfill that ambition, the trio returned to the same sense of wonder they felt upon launching their first musical project back in 2002. Starting out while they were still in high school, the band quickly began landing gigs locally and soon gained a following at the nearby University of Virginia. As their inaugural release under the name Parachute, Losing Sleep debuted at #2 on the Billboard Digital Albums Chart and climbed to #40 on the Billboard Top 200 chart. Over the next few years, along with releasing The Way It Was and Overnight (which shot to the #3 spot on iTunes), Parachute toured with such artists as Kelly Clarkson and Gavin DeGraw, in addition to three sold out headlining tours. “One of the biggest highlights over the years is definitely playing all these venues that we dreamed about growing up,” says Anderson. “Anytime we play a show like that, it’s just mind-blowing for us.”

While Parachute’s indelibly melodic sound packs more than enough power to electrify an arenafilled crowd, each song on Wide Awake comes from much more intimate origins. “Most of my writing process for this album was very solitary.” says Anderson. “I’ve written with other people in the past, but it was fun to go back to the way I used to write when I was a teenager.” And when combined with Parachute’s renewed passion as a band, that approach ultimately allowed for an honesty and heartfeltness that makes Wide Awake their most thrilling authentic album yet.