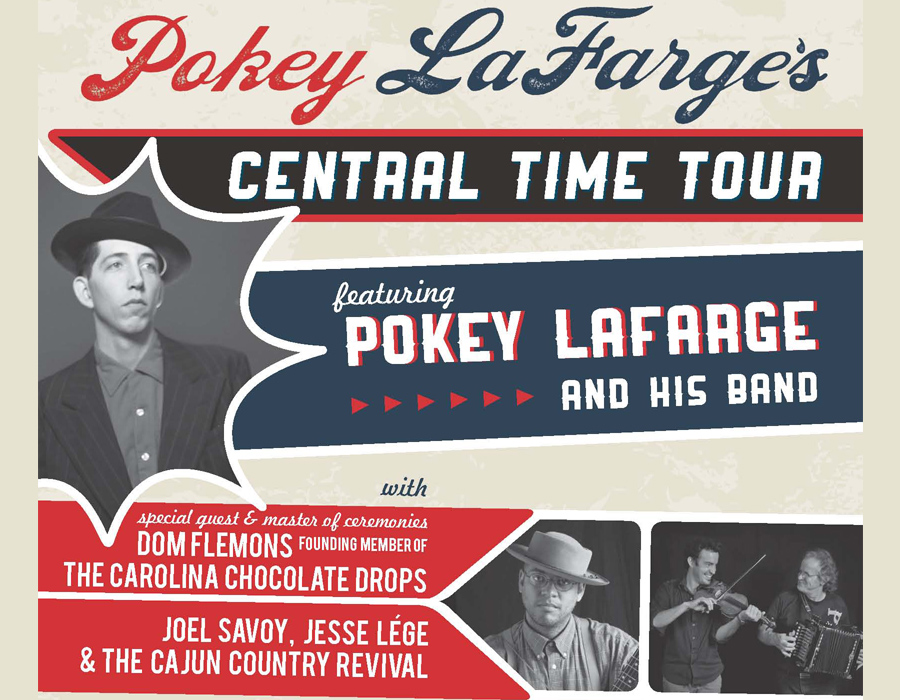 Pokey LaFarge’s Central Time Tour is a musical revue of American traditions for the modern age. Special guest and master of ceremonies Dom Flemons (founding member of the Carolina Chocolate Drops) guides an evening of performances by Pokey LaFarge and his band, Joel Savoy, Jesse Lége and the Cajun Country Revival, The Tillers and The Loot Rock Gang. This diverse lineup presents styles ranging from string ragtime to country blues to Appalachian folk to Cajun dancehall music and beyond. A self-contained, traveling festival, Pokey LaFarge’s Central Time Tour showcases some of the finest present-day interpreters of real American music for a swinging night of entertainment and dancing for all.

Pokey LaFarge is a musician, songwriter, bandleader, entertainer, innovator and preservationist, whose arsenal of talents has placed him at the forefront of American music. Over the last decade, Pokey has won the hearts of music lovers across the globe with his creative mix of early jazz, string ragtime, country blues and western swing. After signing with Jack White’s Third Man Records to release his fifth full-length album (Pokey LaFarge) in 2013, he performed as a musical guest on The Late Show with David Letterman and The Late Late Show on Ireland’s RTÉ One network. Pokey’s rendition of “Lovesick Blues” with Vince Giordano and the Nighthawks, featured on an episode of Boardwalk Empire, was selected for inclusion on the series’ official soundtrack (Vol. 2). Additionally, Pokey appeared in Disney’s The Lone Ranger (both on screen and on the original score), was featured on A Prairie Home Companion and NPR’s World Cafe, and recorded a song for ATO Records’ Divided & United: Songs of the Civil War, produced by Randall Poster. Pokey LaFarge is on a mission, encouraging fans worldwide to think differently about what it means to celebrate musical traditions. Simply put, Pokey explains, “It’s not retro music. It’s American music that never died.”

A few words from Pokey about the Central Time Tour:
“I’ve always been inspired by the revue tours of the mid-twentieth century. These tours sent a caravan of musicians, often from the same record label, to towns across America – big and small – for an evening of music and dancing. My vision for the Central Time Tour rests on this tradition, but presents a wider variety of music, a really well-rounded night of entertainment. I hope it will bring a stronger awareness to the original music of the Midwest, which I believe is often overlooked or under-appreciated. I chose four incredible bands to travel with us – bands that are a bit more underground, write original music, and perhaps our audiences have not yet heard of or seen live. With the Central Time Tour, I want to broaden the appreciation of what it is that makes the Midwest a special place. I want to turn people on to quality music they wouldn’t likely hear on the radio. I want to celebrate our diverse American traditions, and above all, give the good people of the Midwest no choice but to dance, sing and put their minds at ease when the Central Time Tour comes to town.”

Sorry all… cash only tonight for tickets, bars, & food. We do have two ATM’s available, though. See you soon!