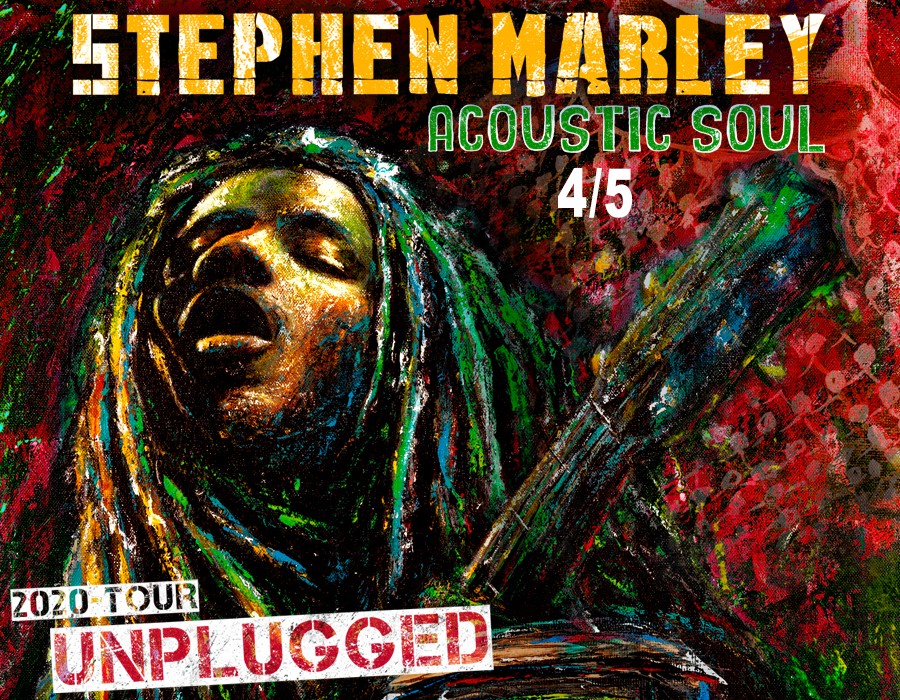 *Tickets from past reschedules will be honored for this date*

The second son of Bob and Rita Marley, eight time Grammy winning musician and producer Stephen was born on April 20, 1972; he began his career as a precocious six-year old singing, dancing and playing percussion with his siblings in the group The Melody Makers whose first single “Children Playing in The Streets” was produced by their father in 1979 and released on Tuff Gong, the label founded by Bob in the late 60s. While still a teenager he assisted in the production of The Melody Makers’ albums including their three Best Reggae Album Grammy winners “Conscious Party” (Virgin Records, 1989) “One Bright Day” (Virgin Records, 1990) and “Fallen Is Babylon” (Elektra Entertainment, 1998). In 1993 Ziggy and Stephen founded Ghetto Youths International as a means of controlling their own music and helping upcoming artists. Stephen’s earliest solo production efforts for Ghetto Youths International includes his late grandmother’s (Cedella Booker) album “My Altar”, followed in 1995 by the Ziggy Marley and The Melody Makers single “Works To Do” and younger brother Damian’s “10,000 Chariots”. In 1996 Damian released his debut album “Mr. Marley”, on the Ghetto Youths imprint, on which Stephen played several instruments and wrote most of the songs, as well as producing the album. Stephen continued to showcase his talent for navigating between genres by effortlessly blending reggae with soul, hip hop and electronic beats on his fourth solo album; “Revelation Part II: The Fruit of Life,” released in 2016. A robust reflection of his work, the album features songs with notable artists including; Rakim, Dead Prez, Wyclef Jean, Black Thought, Shaggy, Pitbull, Damian “Jr. Gong” Marley and more. For the past two years, Stephen and his team worked on the development production and promotion of the annual Kaya Fest. Now in its third year, the Kaya Fest is a music and awareness festival intended to educate the public on the many benefits of Cannabis. In 2019 the festival will expand with showcases in both Florida and Southern California.

Join us directly following the show for an exclusive Meet & Greet opportunity with Stephen Marley!
Each Meet & Greet event is limited to no more than 50 guests, and provides a once-in-a-lifetime opportunity to meet the eight-time Grammy Award winning singer, songwriter, producer, and humanitarian, Stephen “Ragga” Marley.
Proceeds from the Meet & Greet directly benefit the charitable work of GHETTO YOUTHS FOUNDATION, a non-profit organization founded by Stephen, Damian, and Julian Marley to provide aid and resources, opportunity and hope, to communities in need across the globe.
Tickets are $125/person and do NOT include entry to the performance (please purchase show tickets directly from venue website).
Each Meet & Greet guest will also receive a complimentary PIC LOVE bracelet (www.ghettoyouthsfoundation.org/piclove)
Meet & Greet tickets can be purchased at: www.ghettoyouthsfoundation.org/events

Is the the 7/15 Marley show officially postponed? Bc it was a reschedule there is a lot of info floating around..

How will we know when the July 15 show of Steve Marley will be Rescheduled
If you could email me at uss644@yahoo.com
I would appreciate it. All small letters